The Treasurer also issued a Fact Sheet that says: 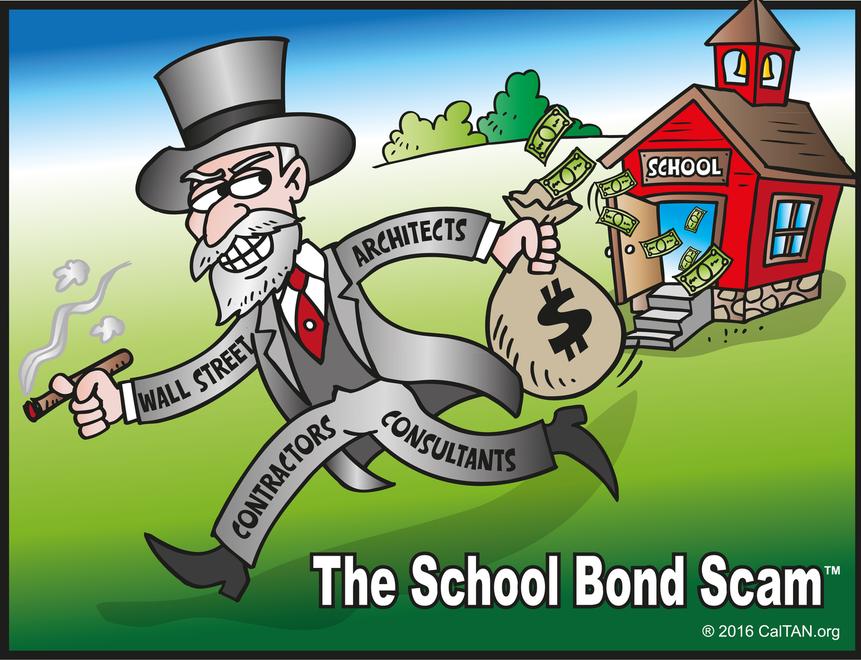 The School Bond Scam:  How It Works

STEP 1:  Companies contribute to ballot measure campaigns, likely anticipating rewards later in the form of school district contracts.  (Companies can consider these donations to be “investments.”)

STEP 4:  Lucrative construction contracts can be awarded to campaign donors, regardless of price.

STEP 6:  The cycle repeats itself every few years (regardless of who’s the district superintendent or who sits on the school board).

​On November 8, 2016 over 100 school districts in California are asking voters to impose over $50 billion in NEW taxes on property owners in their districts. ( See: School Bond Clearing House Website ). In addition, voters will decide on Proposition 51, a state school bond costing Californians $17.6 billion (placed on the ballot by developers and the schoolfacilities construction industry).

State and local school bond campaign records reveal most donations are made by those who stand to profit, including Wall Street firms, school contractors, architects and consultants.  The correlation between campaign contributions and contract awards is well-documented.

As long as school districts give contracts to favored companies -- without regard to price or use of traditional sealed competitive bidding procedures – this “pay to play” pattern will continue.  As a result, school construction dollars are wasted and students are short changed, while Wall Street and others get rich.

"A four-month Voice of San Diego investigation into local school bond campaigns, including public records gathered by NBC 7 San Diego, revealed a pervasive pattern: In 13 of the 17 local school districts that have issued bonds since 2006, a significant correlation exists between the major donors to the district’s bond campaign, and the companies that won work on the bond program."

"WALL STREET FIRMS PREY ON SCHOOL DISTRICTS EAGER TO WIN VOTER APPROVAL FOR BOND ELECTIONS - Municipal finance firms, such as underwriters, bond counsels and financial advisors, front money for bond election campaigns with wink-and-a-nod understanding that they will win lucrative contracts to issue the bonds, once approved by voters . . . [These pay to play arrangements increase school bond expenses] "by as much as 900%."

“There are unscrupulous Wall Street firms offering to fund local bond campaigns in exchange for lucrative contracts . . . [These] ‘pay-to-play arrangements’ rip-off taxpayers and endanger the integrity of school bonds, which are vital tools for building classrooms and meeting the educational needs of our communities.”

​The school bond scam is where those who stand to profit most contribute to ballot campaigns to convince voters to increase property taxes to fund the lucrative contracts they hope to receive from school boards in return for helping pass their school bond ballot measures.

Since 2001, California voters have approved $146 billion in state and local bonds to fix schools.  Every election, voters approve new local school bonds and trust they’re getting good value.  This isn’t always the case.

Most people think school bond funded contracts are awarded based on price, using competitive bidding.  It’s generally assumed that schools are frugal and aim to get the best deal possible with their few precious school bond tax dollars.

You know what they say about making assumptions.

In reality, school districts don't have to award bond funded contracts based on price.  Investigations reveal growing numbers of school districts award contracts to those who donate to bond campaigns.  When it comes to school construction, getting a good deal doesn’t always factor into the district’s decision!

This practice betrays the public trust and cruelly exploits community goodwill.  In time, this type of favoritism and corruption undermines public support for public schools and other government institutions.

"From bond measure to federal probe: How Fresno Unified caught the eye of investigators.”Fresno Bee, October 17, 2015

"Corruption In Your Own Back Yard"  Howard Jarvis Taxpayers Association July 3, 2013